Yabroud or Yabrud is a city in Syria, located in the Rif Dimashq governorate about 80 kilometres north of the capital Damascus. According to the Syria Central Bureau of Statistics (CBS), Yabroud had a population of 25’891 in the 2004 census. The city is known for its ancient caves, most notably the Iskafta cave (where, in 1930, a thirty-year-old German traveller and self-taught archeologist Alfred Rust made many important pre-historical findings), and the Yabroud temple, which was once Jupiter Yabroudis ‘s temple but later became “Konstantin and Helena Cathedral”. Yabroud is home of the oldest church in Syria. The name Yabroud is said to have originated from an Aramaic word meaning “cold”; the city rests upon the Qalamun Mountains slopes at a height of 1’550 m.

The Natufian archeological site Yabroud III is named for the town of Yabroud.

During the war the City was the center of the Battle of Yabroud in March 2014. 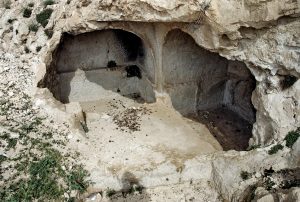 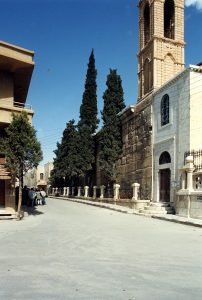