The Tekkiye Mosque or Sultan Selim Mosque is a mosque complex in Damascus, Syria, located on the banks of the Barada River.

Construction
The Sultan of the Ottoman Empire, Selim II had the Sultan Selim Mosque built in the new city of Damascus by expanding his father’s (Suleiman I) urban complex. The complex is composed of a large mosque on the southwest side of a courtyard, flanked by a single line of arcaded cells, and a soup kitchen across the courtyard to the northwest, flanked by hospice buildings. The mosque has two minarets and walls with alternating light and dark stripes. It has been described as “The finest example in Damascus of Ottoman architecture”.

Cemetery
The cemetery next to the mosque is the burial place of the last Ottoman Sultan, Mehmet VI, who was dethroned and went into exile when the Ottoman sultanate was abolished in 1922. He died on 16 May 1926 in Sanremo, Italy and was buried at the cemetery of the Sultan Selim Mosque. It was chosen for being in the closest Islamic country and a mosque of his great ancestors. There are almost thirty other graves of the Ottoman dynasty who died in exile and were not allowed to be buried in the Republic of Turkey at the time. 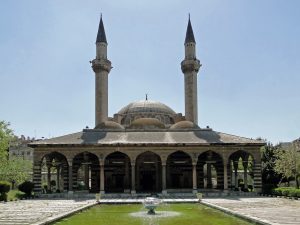 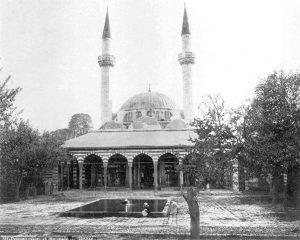