Sayyidah Zaynab Mosque is a mosque located in the city of Sayyidah Zaynab, in the southern suburbs of Damascus, Syria. According to Shia Muslim tradition, the mosque contains the grave of Zaynab, the daughter of âAlÄ« and FÄtimah and granddaughter of the Prophet Muhammad. Sunni Muslim tradition places Zaynab’s tomb in the mosque of the same name in Cairo, Egypt. The tomb became a center of Shia religious studies in Syria and a destination of mass pilgrimage by Shia Muslims from across the Muslim world, beginning in the 1980s. The zenith of visitation normally occurs in the summer. The present-day mosque that hosts the tomb was built in 1990.

Specifications
The shrine is an example of Shia-Persian architecture and the dome is gold-leafed. There is also a large mosque adjoining the shrine which can accommodate more than 1’300 people in it and a further 150 in the attached courtyards. The resting place of Sayyidah Zaynab is enclosed within a cage-like structure, found directly beneath the golden dome. The doors of the shrine are made of pure gold with mirror works on the roof and walls. The two tall minarets of the shrine are an excellent example of the architecture. The shrine has a large market in front of it with many religious things readily available.

The shrine has been managed by the Murthadha family since the fourteenth century. Financially, the shrine has been funded mainly by the Iranian government following 1979. Given their financial investment, the ideological direction of the shrine and the prayer hall follow Ayatollah Khamanei. The Lebanese Hezbollah displays several posters and sets at the shrine.

The shrine is dominated by pilgrims until it is closed at 9 pm after the Isha prayer. The majority of the pilgrims are Iranians, Indians, Pakistanis, as well as Kuwaiti, Bahraini, Lebanese, and Iraqi (Shia) Arabs. A community of Afghan refugees who fled from violence in their country now live in the area surrounding the shrine. Sufis also visit the shrine. Prayers are led by Ayatullah Mujtaba Hussaini and Muslims from all ethnic backgrounds can be found praying there.

The shrine also has a separate prayer hall for Sunni men where they hold separate Friday prayers.

The shrine is sometimes seen by some as a place of miracles.

Ali Shariati, the Iranian ideologue of the Islamic Revolution of 1979, had wished before his death, to be buried in the yard of Zaynab bint Ali, the descendant of Muhammad and beloved daughter of Hazrat Imam Ali. His shrine is found within the compound of Sayyidah Zaynab Mosque and is regularly visited by many Iranian pilgrims.

Recent history
On 27 September 2008, a car bomb attack took place on the intersection leading up to the mosque, killing 17 people.

On 14 June 2012, the town became the target of a suicide car bomb attack where around 14 people were heavily wounded.

Since mid-summer 2012, the town has been under attack from armed militants in neighbouring Sunni towns. Many Shia and pro government families were driven out of their homes in southern Damascus and sought refuge in Sayyidah Zaynab. Constant shelling became more frequent in this predominantly Shia town, and rockets landing on random places in the town became common.

On 31 January 2016, at least 60 people were killed in three bomb blasts in the Koa sodhda area, near the shrine. At least another 110 people were also wounded in the blasts, caused car bombs. 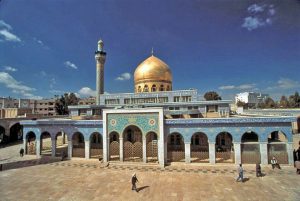